Homepage » Media Center » News » Al-Rahahla: In the governorates of Aqaba and Ma'an, the Social Security Cor... 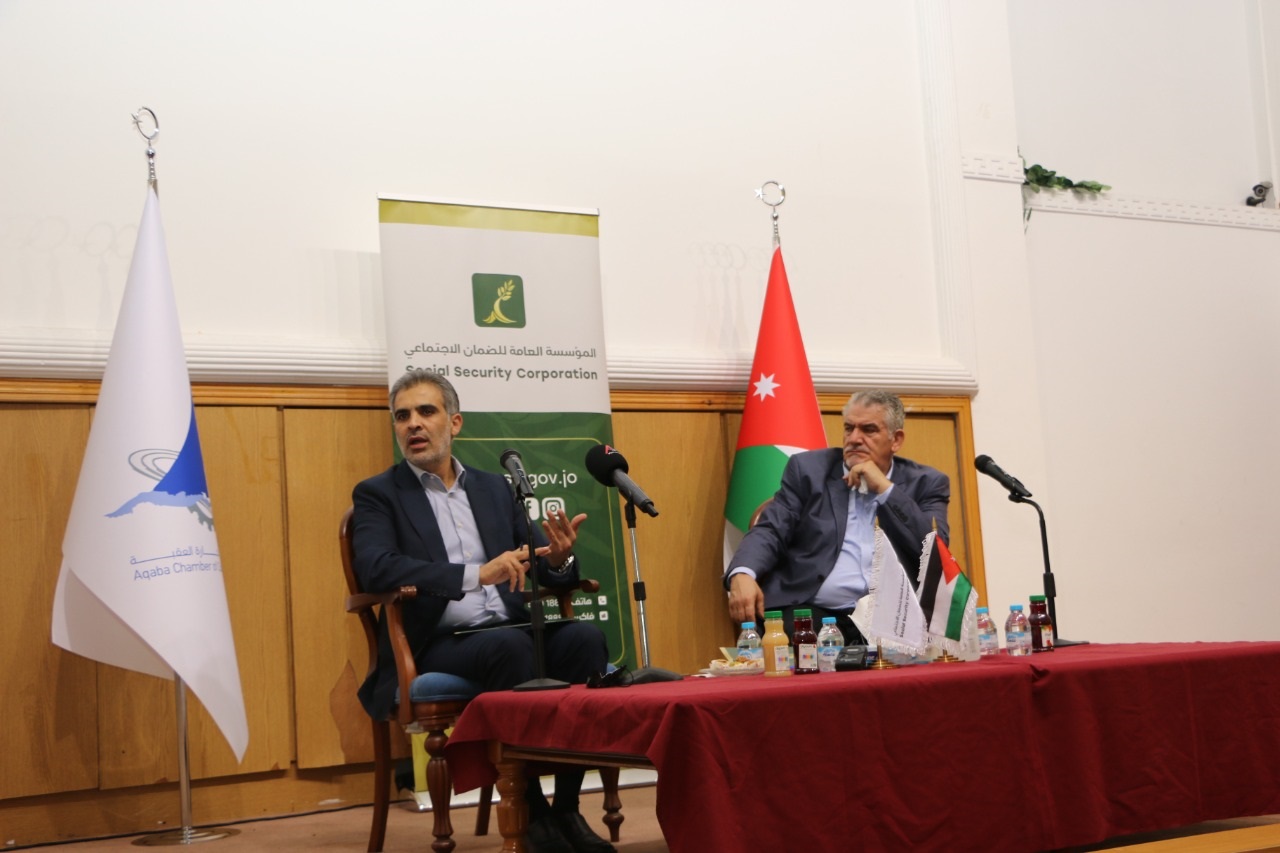 The proposed amendments are focused on the axes of social protection, response, financial sustainability, and motivation.

The proposed bill includes amending the annual inflation increase calculation to be based on the average rate of inflation and the salary growth, which results in a higher increase for retirees

Expansion of unemployment insurance for insured persons with a contribution history of (20) years or more, allowing them to receive unemployment benefits for a duration of (12) months

In the first quarter of next year, the Corporation is working on creating the legal, technical, and operational framework for the implementation of health insurance.

Dr. Hazem Rahahleh, General Manager of the Social Security Corporation, stated that the proposed amendments to the Social Security Law are aimed at strengthening social protection for contributors, retirees, and their families, as well as ensuring the security system’s financial sustainability, allowing it to fulfill its mission of protecting all generations.

As part of a dialogue meeting organized by the institution in the Aqaba Chamber of Commerce and in the presence of several representatives from the governorate, he explained that the proposed amendments to the law were supported by a wide range of official and popular bodies, representatives of professional and labor unions and parties, women’s organizations, and the Aqaba Chamber of Commerce, in addition to civil and local society institutions in the governorates of Ma’an and Aqaba. They agreed there are four main axes that are being addressed by the proposed amendments: social protection; response; financial sustainability; and motivation, all of which are currently being debated in a national dialogue before their final approval, which the institution notes is a draft that has not been finalized to proceed through the legislative stages in order to get a variety of opinions.

He went on to say that security is linked to social and economic protection, which is affected by changes and circumstances, necessitating a response that reflects these changes in order to keep the social security umbrella and the corporation’s financial position strong and stable enough to fulfill its role and mission.

Al-Rahahleh stressed that social security concerns every worker and every family in the Kingdom, and every household in Jordan has a retired or contributing member.

Al-Rahahla discussed the axis of motivation, which included allowing private sector establishments to provide old-age insurance to workers under the age of thirty years in two tranches (75%) and (50%), which entails reducing the percentage of contributions to these facilities, as measures by the corporation to reduce unemployment and contribute to increasing employment rates in the private sector. Additionally, the initiative enables these establishments to partially cover their employees, regardless of their age, for old-age security, resulting in a reduction in contributions to (13.5%) if growth rates drop below two percentage points in the preceding three years.

The protection axis, according to Al-Rahahleh, includes several positive benefits that are reflected on the insured and retired, noting that the draft law amendment will include amending the increase in pensions to be calculated according to the average rate of inflation and the growth rate in wages, resulting in a rise in pensions, and early retirement salaries will be linked to annual inflation increases. As a result, it is inversely tied to salaries, with a full annual rise provided for incomes of less than 300 dinars, a rate of (75%) for salaries of 300 to 500 dinars, and a rate of (50%) for salaries of more than 500 and even a thousand dinars. Early retirement salaries that exceed a thousand dinars are related to inflation upon reaching an old age.

He pointed out that the proposed draft amendment to the Social Security Law included provisions for allocating a natural death pension to the insured’s eligible heirs despite his death outside the service covered by the social security, as long as he had previously contributed to social security for a period of at least (96) actual contributions instead of (120). A contribution in accordance with the current law, provided that no more than (60) contributions have been made since the death occurred, and that it is applied retrospectively to individuals who are not qualified under the current law. Additionally, the proposed revision to the law will allow the sons of the Gaza Strip and the children of Jordanian women to participate voluntarily in social security which is currently prohibited. The existing law provides for elective social security coverage.
He also stated that the draft law increased the extension period for applying for filing a relapse claim to three years, rather than one year, as required by current law, to ensure that they have access to treatment and can review their disability percentages. He also stated that unemployment insurance has been expanded for those who have (240) contributions or more. They may receive unemployment benefits for a period of (12) months at a rate of (70) percent of their salaries, subject to monthly deductions.

Al-Rahahleh explained that the conditions for the insured woman’s entitlement to maternity insurance have been expanded to become (8) continuous or intermittent months during the last (12) months of service for her, or that she has (6) continuous months before giving birth. The protection axis also included support for establishments to implement safety and health standards professional, according to certain criteria.

The conditions for an insured woman’s claim to maternity insurance have been extended to include (8) continuous or intermittent months during her last (12) months of duty, or that she has (6) continuous months before giving birth, according to Al-Rahahleh. The protection axis also includes assistance to establishments in implementing professional safety and health standards in accordance with a specified criterion.

Al-Rahahleh stated that the corporation’s priority is to implement health insurance for the insured and retired, so that it covers all insured and retired individuals in the private sector, as well as their family members who are not covered by any health insurance acceptable to the institution. He also stated that the participation rate in this insurance will be 3%, borne by the insured or retired individuals, and the institution will contribute through the Health Insurance Fund through surplus revenues of the Work Injury Insurance Fund, in addition to the government’s support allocated for this insurance. The treatment will be within the private sector hospitals, and cancer cases will be fully covered and expected to be implemented during the first quarter of next year.

Dr. Hazem Rahahleh, the General Manager of the Social Security Corporation, answered all of the attendees’ questions and inquiries.